You’re creating quality content backed by the best tech on the planet. But you want to do more. With Stream Deck, unleash your creative genius and make waves across Twitch and YouTube. All while focusing on what matters most: your audience.

ut loose, keep productive, and be ready for anything.

Elgato Game Capture, OBS, Twitch, Twitter, TipeeeStream, XSplit, YouTube, Mixer, and more – Stream Deck integrates your tools and automatically detects your scenes, media, and audio sources, enabling you to control them with a quick tap of a key.

Automated alerts make life easier. But between thanking donors and welcoming new subscribers there’s ample opportunity for self-expression. Employ Stream Deck to level up your onscreen antics with GIFs, images, videos, and audio clips. While you’re at it, apply lower thirds and bookend your content with signature intro and outro graphics. Your options are endless, so explore and experiment. Do what you must to sharpen your creative edge, and do it with a personal touch.

Customizing Stream Deck is effortless. Simply drag and drop actions onto keys, and make them your own with custom icons. Need more actions? Turn keys into folders to amass and access as many actions as you want. Better yet, save unique key configurations as dedicated profiles for different games and apps, switch between them on the fly, and share them with fellow creators.

Easily create your own icons with Key Creator.

Gone are the days of navigating myriad windows to trigger an action, and relying solely on automated plugins to expand your production value. Now, you hold the power to pioneer a new era of content creation, and lead your audience to uncharted frontiers of inspiration. Now, you’re in control.

There are no reviews yet.

Only logged in customers who have purchased this product may write a review. 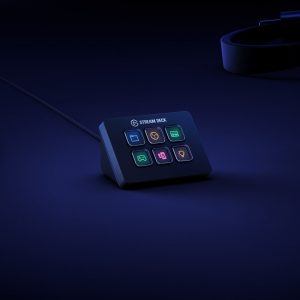